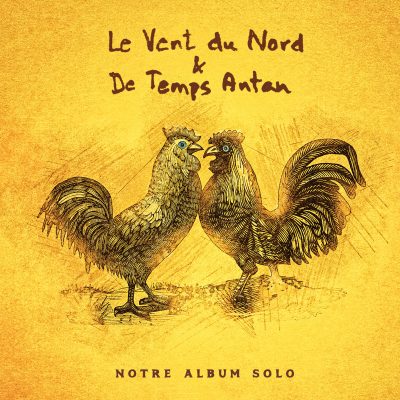 Following successful tours in 2016 and 2017 in Quebec and the rest of the world, Notre album SOLO will be available November 1st!

Everyone will want to get this album, which brings together two excellent, internationally renowned traditional Quebec music bands: Le Vent du Nord and De Temps Antan.  This will allow more people to discover the never-heard-before material of the SOLO concert, which is arranged for 8 first-rate singers and multi-instrumentalists. Winner of the 2018 Opus Award in the Concert of the Year/World Music category, SOLO is as remarkable on record as on stage!

Bright, festive songs!
The 8 members of this collective are among the best artists of the younger generation of traditional musicians. They are Simon Beaudry, Éric Beaudry, David Boulanger, Nicolas Boulerice, André Brunet, Réjean Brunet, Olivier Demers and Pierre-Luc Dupuis. Their experience and vast knowledge of the genre allowed them to unearth amazing traditional songs and write exceptional original compositions. This repertoire always makes people want to party and have fun. The combined power of the 8 voices and various instruments creates a unique sound on the album, as the festive, playful side of De Temps Antan blends perfectly with the depth and harmonies of Le Vent du Nord.

Bring the atmosphere of the concert home!

This album was produced in Montreal at the Piccolo Studio with renowned sound engineer Charles-Émile Beaudin (La Voix, Céline Dion, Marc Hervieux). The songs were recorded live, as the 8 musicians played together. The goal was to capture the dynamic energy of the concerts.

Back on stage in Quebec during December

In December, a ten-date SOLO tour will take place in Quebec, wrapping with the 22nd “Veillée de l’avant-veille,” a grandiose final concert at Club Soda in Montreal. With their extraordinary performances that double as family gatherings, this bold collective presents THE must-see musical party of the season. Get ready for an unforgettable night celebrating our roots with authenticity, humour and good fellowship!