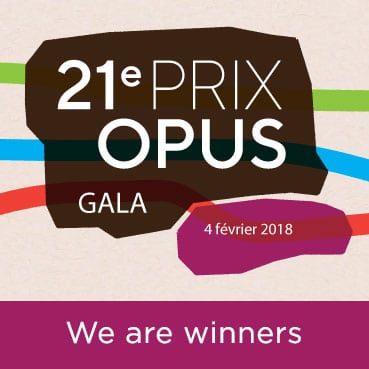 During the 21st edition of the OPUS AWARDS, held yesterday february 4, 2018 at the wonderful Bourgie Hall of the Montreal Museum of Fine Arts, the SOLO show with Le Vent du Nord and De Temps Antan was awarded in the category SHOW OF THE YEAR – World music.

Congratulation to both bands and all those who collaborated in the success of this production. A very special thanks to the presenters who believed and believe in this musical production and for the trust they place in us by working with ou team.

With this major recognition, the collective will continue its momentum by publishing a CD in the summer of 2018 and taking the road to major European festivals at the same time.  A Quebec venue tour is planned for next december.

The Prix Opus (Opus Awards) were created by the Conseil québécois de la musique (CQM) in 1996 to highlight excellence, vitality and diversity of the Quebec music scene. By showcasing the quality and plurality of Quebec music, the CQM seeks to broaden public awareness of this discipline.  The Prix Opus cover the various repertoires of concert music (Medieval, Baroque, Classical, Current, Jazz, etc.).